Kestrel's all over the place.

Merry Christmas to everyone who reads or follows this blog and thanks for your support.

Stayed close to the village today and after having just had my first Kestrel for months i was rewarded with another three today.

The first two were entangled within a hawthorn bush fighting over a recent kill what a racket they were making. 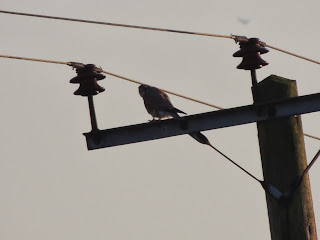 Still lots of frost around and birds starting to struggle to find some food, but not the Redwings and Fieldfare had at least 250 birds only about 25-30 were Redwing. 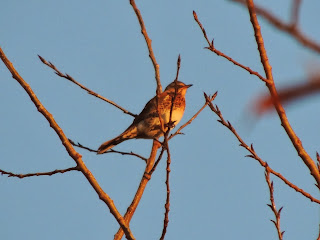 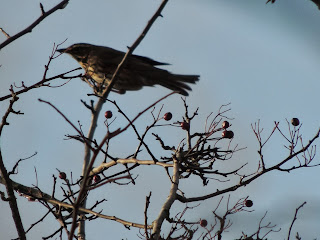 Continued along the lanes and noticed a large flock of Sparrows but on closer inspection found within the flock were Bullfinch, Chaffinch, Greenfinch, Yellowhammer, Dunnock and a Robin. 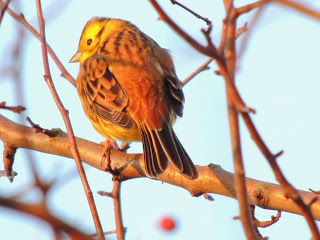 Moving on I could see a distant GSW and also in the birch trees I could see three birds feeding, I tried to get close but all the birds were a bit flighty today probably due to all the shoots that were taking place in the area.

Having got underneath the birds they seemed to take no notice of me as they were busy feeding. 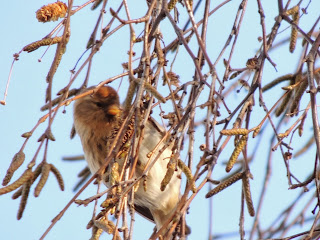 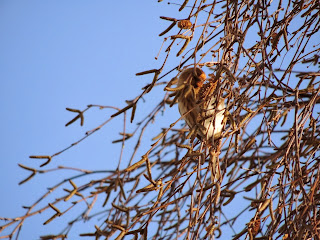 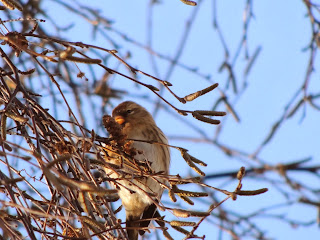 Decided to try the Carrs at North Duffield as the lanes were getting busy with weekend dog walkers and horseriders.

Just as I arrived so did a flock of upto 150 mixed Canada and Grey lags as well as 3-4 Pink footed geese.

35+ Whoopers still around and the single Black Swan a flock of 250+ Lapwings arrived with 25+ Ruff and the same amount of Dunlin. Shelduck and Pintail flying down the river and a procession of Gulls and Cormorants visible. Sparrowhawk scattered all the Lappies but did not spoil the day.

And probably some that i have missed.

At last a Kestrel

Quick walk around the patch this morning resulted in some little gems.

Wasn't expecting too much this morning as a stiff cold wind was blowing across the valley, but I decided to plod on and was rewarded with a cracking Siskin and a stunning male Bullfinch.

Still loads of Crows and Rooks busy in the newly ploughed fields and a couple of huge Herring gulls flew over.

Then after at least 6 months of not seeing one a Kestrel was hunting in the fields. 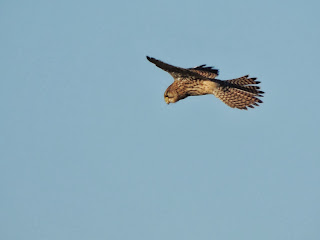 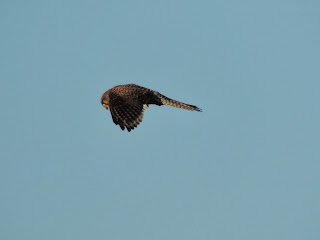 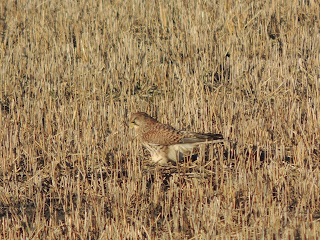 Down on the Ings this Robin was a nice greeting (given the time of year) it followed me down the path and as I looked across to the new feeder a huge Buzzard emerged from the undergrowth. 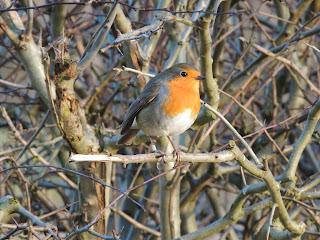 About 30 Whoopers feeding in the distance was good to see as they were not to be found anywhere yesterday. 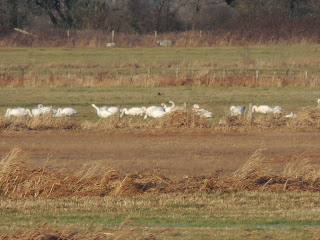 A few Fieldfare were vocal in the hawthorn hedges and Chaffinch and Blue tits were in good number.
Water levels starting to rise as Teal and Wigeon were making the most of it.

And a Partridge in a bird hide.

Had a wander down to the local hides this afternoon a few Fieldfare about and a nice Sparrowhawk.From the Geoff smith hide I could see 4 Swans in the distance so decided to have a look from the gargany hide. The LDV team are making a cracking job of repairing the paths ready for the oncoming water.(thanks to all concerned)

On arriving in the hide I was greeted by this poor unfortunate soul not sure how it got here but it was clear from the feathers in the hide that at some point it had been trapped inside. 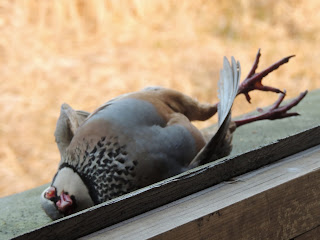 Looking out across the ings still not much water about but Teal and Wigeon were making the most of it. 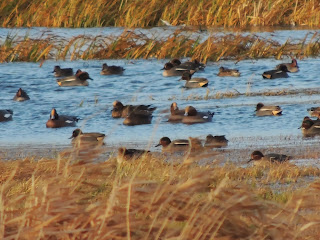 Swans turned out to be Mute's and no sign of any Whoopers, will try again tomorrow weather permitting.
Posted by Zing's LDV at 5:45:00 pm No comments:

Some good news and some not so good....

Decided to visit all my 7 known spots on the patch which over the years have almost guaranteed me a Barn Owl sighting.

Sadly nothing doing! even my best site nothing, what has happened to all the Barn Owls in the Lower Derwent Valley?

Could not help but notice that the hedgerows are still groaning under the weight of uneaten fruit and then as if by magic in came a huge flock of Fieldfare at least 200+ birds. 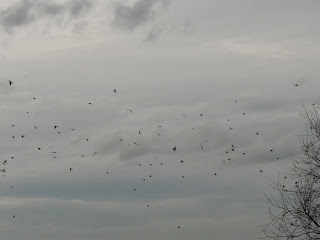 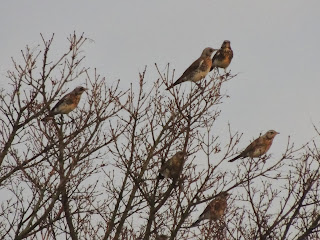 Had a look at the new footpath that's under construction and then spotted a new feeder it was under siege from an assortment of Great tits, Chaffinch, Greenfinch, and one single Brambling. 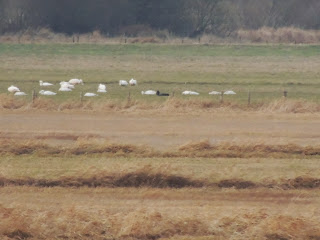 distant views of 30+ Whoopers and one Black Swan. 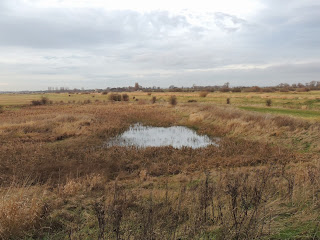 View from the Geoff Smith hide dare i say it but we need some H2O!!!! 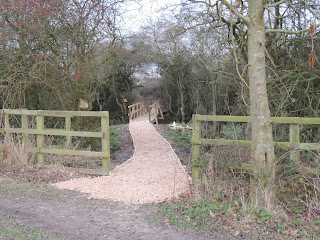 New footpath under construction at the North Duffield Carrs. 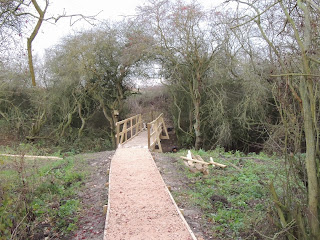 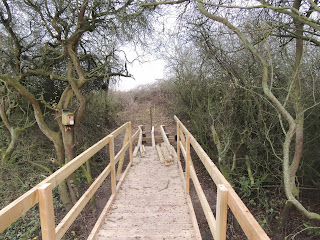 New feeding station sadly no pic but there was a brambling hanging around this feeder. 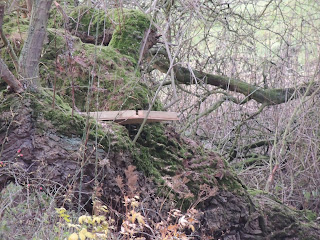 One final stop off at one of my nailed on Barn Owl spots but sadly more chance of seeing an England cricket victory!! 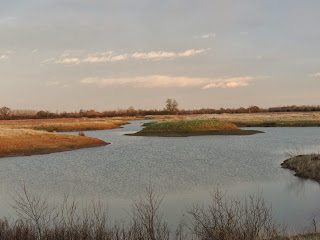