A strange end to the year in terms of weather had sun, rain, driving cold wind but the birds were out in force.Usual stuff on the ings as I arrived at the GS hide only to be told that I had just missed a peregrine. (typical me!). Loads of wigeon and teal as well as the stunning pintail which seems to be hanging around, 2-3000 lapwings and just as many gulls are still around seem to come in to roost at about 3-3.30 each day. 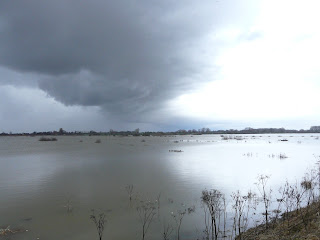 not looking good as this weather front moved in. 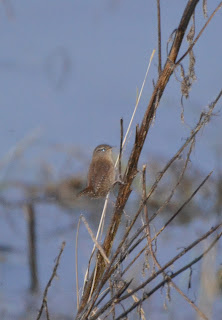 Wren seemed as busy as ever and an increase in the robin population!!
Still got at least 100 swans in the valley but they are just keeping out of view all but the mutes.
Nearly got the barn owl I was too busy taking pictures of the strange sky. 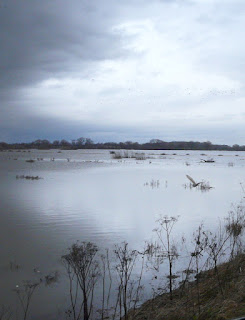 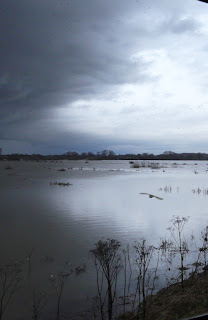 Best wishes to all fellow birders and follower for 2013 Hope its a great birding year for you all.﻿

5 degrees C  raining and overcast but at least the light is better than yesterday.Birds don't go in when it's wet so I thought what the hell get out in the wet air!

Having read Awbirders blog (Thrushes) was greeted at the GS hide by a superb mistle thrush (don't see enough of these birds here) then into the hide still stacks of H2O but it has dropped a good 10 inches or so. Loads of teal and wigeon as usual mallard Canada geese and grey lags all birds covering up in the driving rain.

Decreasing water levels have now exposed the very top of the laughingly called flood defence's so it is an ideal perch for passing waders,over 500 lapwings about and many standing to attention on the narrow grass strip, several ruff were also noted in with them and at one point up to (16) redshank pleasing as they have been noticeable by their absence of late.Pochard (8) and goldeneye's (6) showed well pintail (4) were stunning especially the male superb bird!

A single shelduck flew through at break neck speed thought it was being pursued by a raptor but alas not.At this point I was joined in the hide by a fellow local birder and ruff  (6) were observed in with the lapwings. Black headed gulls shattering the peace as usual and at this point several long tailed tits were observed outside the hide, 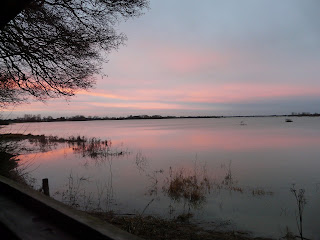 Then for some reason we started to have our attention drawn to the surrounding shrubs and bushes a moorehen plopped into the swollen water and blue tits and wrens were noted, at this point a great tit began to make the sort of song you normally associate with the early part of the year (very odd!) Blackbirds were very agitated and at this point a barn owl flew majestically pasT the hide. Starling's and fieldfare were perched in the distant poplars and at this point my fellow birder noticed a treecreeper working its way up the tree next to the hide (this is a rare bird for here!!!)

in with the Long tailed tits there was a distinctive but somehow different call I looked up and was amazed to see this little bird working it's way towards me got the bins on it and nearly had a heart attack (this is where it gets tricky)  classic orange streak on crown, and what looked like an eye stripe two options firecrest or goldcrest!!! one fantastic (for here) one MEGA!!!! on reflection my head says goldcrest but I so hope that anybody out there tomorrow will prove me wrong. (please!!)

Calm before the storm?

Water levels on the LDV have dropped slightly with no issues on the road from Bubwith bridge.
Started with the usual mixture of wigeon and teal, six whoopers in the turf field were nice to see,lots of canada geese, greylags,mallards and mutes, lots of swans in the distance so could not id them. A dozen pochard were an added bonus as was the display put on by a single female goldeneye, first shelduck for a while and the usual build up of lappies and gulls. Long tailed tits still trying to find a meal outside the hide as well as the usual robins wrens and blackbirds. Pintail still hanging around but mainly females (hope the males have not been shot!! why is this bird still a "quarry" species?)

Buzzard nearly lost its temper with two crows and a female sprawk was keeping an eye on things, but i get the impression that the birds are preparing for the oncoming wild weather..just a thought.
Posted by Zing's LDV at 3:55:00 pm No comments:

Started out with a trip to the local hide (GS at North Duffield) was greeted by a familiar face.. 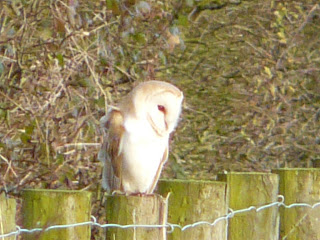 POP Goes the Weasel
Then went down to the hide and watched a Weasel trying to catch a Wren !! Brilliant!!

A slight increase in Water levels and the water is now on the road (passable at the moment) Loads of Teal and Wigeon and 100+ Swans distant in the valley.Two Buzzards soaring kept the local pigeon population on its toes then a high speed flypast by a large Sparrowhawk within 20 feet of the hide, Ketrel was struggling to find food but the local Robins were as vocal as ever. 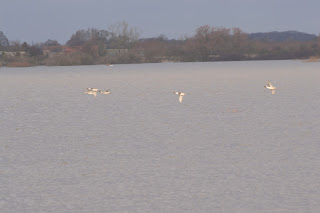 A stunning flock of 50+ Dunlin put on a fine show, as did the huge Lapwing flock.
Very strange to see what looked like a Dunlin (cheers Tim) leading the flock of Lapwing. 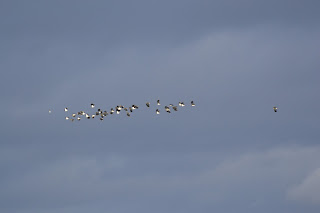 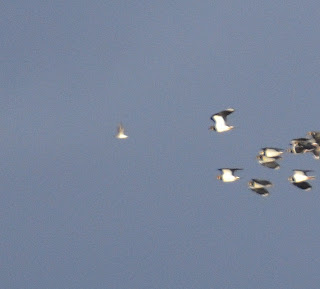 Boxing Day Crackers ...12 Long Tailed Tits were looking for food outside the hide. 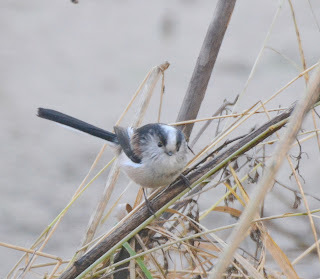 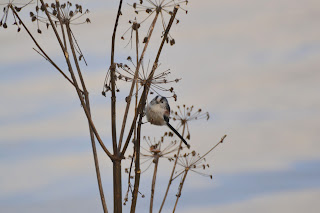 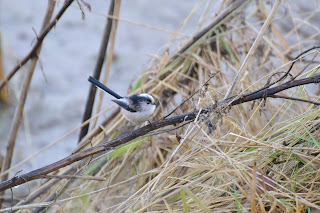 ﻿
﻿
﻿
Then a stunning distant flypast by a Male Marsh Harrier incredible in the sun. The swans at the far end of the valley were too much of a temptation so I decided to up sticks and head off, Not much at Thorganby so i moved on to be rewarded by a bird i have seen once this year and twice last year good to see its doing well.. 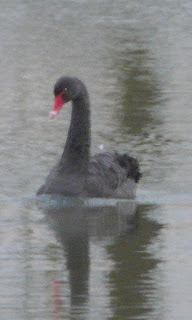 ﻿
﻿
Four distant Whoopers and at least 2 Bewicks in a line of 30-40 Mutes taking shelter from the wind.﻿
2pm and the weather taking a turn for the worse so i headed off home and noted a large flock of Finches flying across the road Chaffinch and Brambling hope to catch up with them tomorrow,
Also had 150+ Rooks,Blackbird,and over 1000 gulls mainly Black headed and common Tufted Duck and Gadwal were also noted .﻿
﻿ 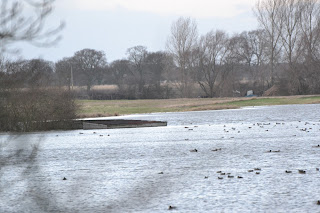 This was the scene down at the carrs today..
Had an interesting last hour at the GS hide plenty of wigeon, teal, lapwings, good size flock of golden plover.There is also a huge gull roost building up nicely, swans still around but too distant to id.Had a dabchick diving right outside the GS hide.Also a couple of gadwall and shovelor.
Water is still rising and could be back over the road by Monday.....

All looking good for tomorrow.
Posted by Zing's LDV at 6:34:00 pm No comments:

To bird or not to bird?

Not sure what to expect today missed all the weeks action due to work and fog.Was supposed to be xmas shopping so got up and was greeted by superb sunshine yipee!!.

Looked out of the bedroom window stunning view across the ings and then spotted 8-10 Mute swans,100's of Wigeon,Ruff, 2 Black swans yes! 2 stacks of greylags and tufted ducks.Xmas shopping might now be on hold!

Went to the kitchen window usual batch of sparrows tucking into the seeds on the table joined by a lovely festive Robin,Great Tit,Dunnock,Starlings (my god they are loud) Blackbird Blue tit and collared dove then a Marsh tit joined in much to the annoyance of the sparrows.

So do i go xmas shopping?........................
Hit one of my local spots and was rewarded with a splendid flock of Fieldfare, Kestrel hovering was nice to see, then onto the water and was faced with a stiff North Westerly it was strong! as if by magic 6 Bewicks, Distant views of 8 Scaup were a real bonus 4male 4female greylags a plenty and 100s of swans on the far bank mixture of whoopers and mutes.Wigeon and Teal in big numbers as well as Lapwings. Also came across what looked like a very grey Wheatear looked like maybe a cat had encountered it. Loads of Mallards and Shelduck made for a pleasant morning and then i had these on the way back to the car.

Moved onto another favourite spot and had GSW and 2 siskin loads of goldfinches on the local garden feeders and then on the canal 2 dabchicks hunting for insects amongst the reeds, Started to cloud over and could see in the distance that the sun was still out on the carrs so headed back to the GS hide.

Linked up with a couple of regulars at the hide and was amazed to see how still it was. Loads of water and lots of ice,Highlight was watching half a dozen wagtails skate around catching insects.

Later on Wigeon started to appear as if from nowhere and the gull numbers started to build up Pintail was stunning in the sun but out of camera reach. Wrens were very aggresive and active as was the local early warning Blackbird (lets me know when Owls and Raptors are about) 40+ dunlin and loads of Lapwings flew in Barn owl made his usual appearance and rounded off what was a cracking day. 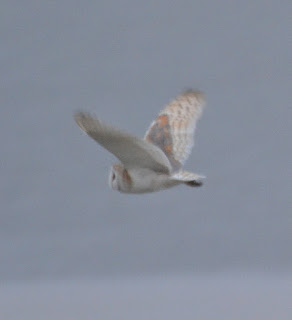 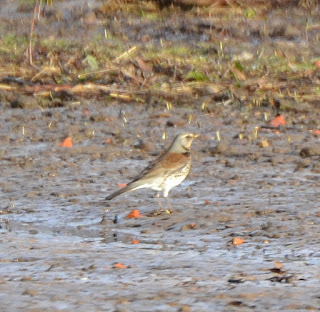 This was the scene today at Costa del Duff. 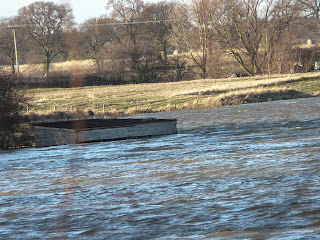 Had 100's of Lapwings and a few Ruff and Redshank,Plenty of Teal Wigeon and Shovelar.
Watched a Kestrel and Rook Knock bits out of each other.Distant Whoopers (6) Big Gull roost building up must have been 1000+ BHG's as well as Juv Herring,LBB.Good size Fieldfare flock (60+) was also a highlight.
You had to feel sorry for the poor Reed Buntings there were at least 20 in this bush as all their usual roosts were 6 feet under! 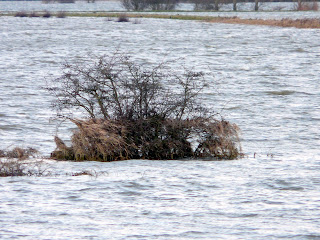 Decided to put together a local blogspot for all things LDV early days yet but hope to keep it up to date and inform everyone of whats worth seeing.
Posted by Zing's LDV at 10:02:00 pm No comments: 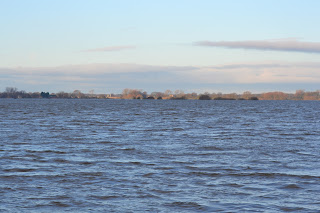 Email ThisBlogThis!Share to TwitterShare to FacebookShare to Pinterest
test post for all things ldv
Posted by Zing's LDV at 9:48:00 pm No comments: